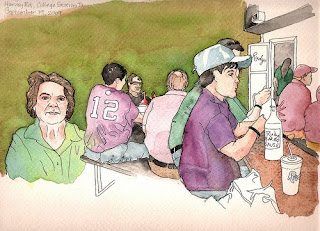 Do you remember this sketch from last year, here. Well, I thought I had destroyed it when I went to add watercolor. I stopped before getting very far at all. Sometime during the last year, I realized that sometimes paintings go through ugly stages. I would probably have approached it differently than I did in this particular case, because of all I've learned, but I think I managed a save here. I know there are spots still not painted...but I liked them so they stayed. This has ended up in a frame on my wall. So, yes, it's a good night! (I should mention that the woman on the left was my Sketchcrawl partner, Cecelia. )

Also, I just received an order from DickBlick. I bought a da Vinci maestro travel brush, one piece of Fabriano Artistico 140lb cp paper to try, and a hand.book watercolor sketchbook, which I wouldn't have bought if it didn't come with a #2 escoda travel brush. (My first two pure Kolinsky sable brushes!) I'm WAY excited and I can't believe it got here SO fast! I have to give my kudos for DickBlick. There was a mistake in the address during my paypal processing, so it was shipped all the way to Idaho. Where I no longer live. They were so great about resending the order. They were pleasant to deal with, and I received it two days later!! Great customer service!! (Oh, and I've done a little playing with the brushes....LOVE!!)
Posted by Unknown at 4:14 PM