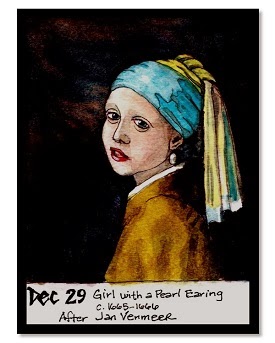 Obviously this is from a while back.  It is approximately 3" x 3.5", watercolor and ink. The Flemish style of painting is one of my favorites, and what better way to study it than to copy a master?

Currently I am learning to use acrylics. Other than the finger painting days of kindergarten, I've never used them.  (That was acrylic, wasn't it?) They follow me to bed and infiltrate my dreams.  I even had a dream where someone was showing me some techniques.  Sometimes I cannot fall asleep as the colors and images dance around energetically, willing me to get back up and put them down on canvas.  Not such a bad thing, I think.

Meet Rex. My sister's American Bulldog. 87+ lbs...depending on how good we've been at restricting his diet. In June of 2012, my sister was preparing to move back to the mainland US from St. Croix, Virgin Islands. Airlines won't accept some breeds due to their shorter snouts and breathing problems...American bulldogs being one of those breeds. When several of her friends got together to charter a plane for their animals, she knew she had to have him on it. And since she wasn't actually ready to move back yet, my husband and I drove from Texas to Fort Lauderdale, FL to pick him up and drive him back to Texas. We took care of him for a month. I have done many, many drawing of Rex. You might think that all he does is sleep, but that would actually just be the best time to sketch him. If he knows I'm looking at him, he comes to me wanting to be petted.


It never occurred to me that I would like this breed. But I LOVE Rex. He is the most awesome dog ever. I know I'm biased. I have had several dogs in my life, great ones even. But I have never had a dog with a sense of humor. Rex is a clown. He loves to make me laugh. You know how dogs will chew themselves...just with the front of their teeth? He does that to me and it tickles. When I laugh, he does it even more. It's like his version of the tickle monster. And then we end up wrestling around. So meet Rex. You'll probably be seeing a lot of him here.

PS  I also updated with my latest addition to the sketchbook Dan and I are sharing.  See the addition at http://2-n-fro.blogspot.com/ .
Posted by Unknown at 8:39 AM 13 comments:

Eh...I finally caved and joined the ranks of Google+ after avoiding it for forever, not wanting to get involved in one more internet thing that would steal time from art.  Though I've not spent any time yet trying to figure it out, I did add people to my circles, to the point that I reached my limit for the day already.  Whether this was a good decision remains to be seen, but so far I am overwhelmed as the page scrolls and scrolls and scrolls and is filled with some things that I have no interest in whatsoever.  As I type this, JayZ fills several sections.  JayZ?  I could care less about him!  Dwell...yes, that one is great! I really only expected information on posts from the people I connected with.  Perhaps you have some opinions on this?  Should I run?  Is it a colossal time sponge? ...or does it really make it easier to keep up with friends?

Over the years, my online friends and I have had many conversations about finding time for art.  I have a new one for you.  When my husband and I moved to this apartment in October, we put off getting cable since we spend more time online than watching television.  One week turned into two, into three.  I DO NOT MISS IT--AT ALL!  And the best part of it all...I have so much more time for making art!  I have decided that I will not be going back.  No cable. No television.  Life is so much better!  It is a time sponge!  Sucks the life right out of life! 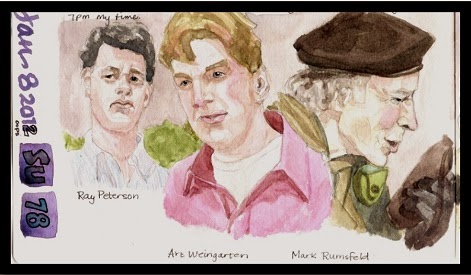 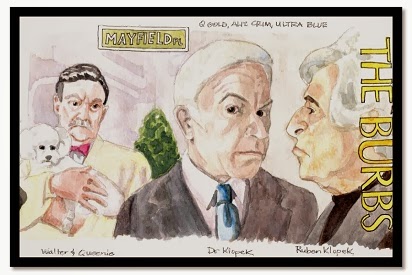 So with all of that said...I think I should probably post some art, since that is my blog's purpose after all!  How about some Burbs!  Love this movie so much...it is difficult for me to hit pause.  I stopped working in this sketchbook for now due to a boredom which slowly crept in.  I like the idea of drawing from movies when that is all you can get to at the time.  I only have a few more spreads that I haven't posted yet.  Maybe one day I'll start this one back up...but I am hoping that I find so much more inspiration in other things that it will not be necessary!