Here are two atc's that I did for Ripple. I hope that you will stop by Ripple and either buy a card, or make a card, or both! Here is what it says on their blog:

"Each sketchcard on this blog is $10.00. The $10.00 is a donation to help the animal victims of the Deep Water Horizon Gulf Oil Spill. Every penny is donated. The two Non-Profits that are benefiting are The Institute for Marine Mammal Studies and The International Bird Rescue Research Center. You can purchase a card if you donate directly to one of the non-profits and email me the confirmation and your address to ripplesketches@verizon.net. The artist will mail you the signed card.
We don't have to feel helpless. We can help. Our small actions together will ripple outward. " 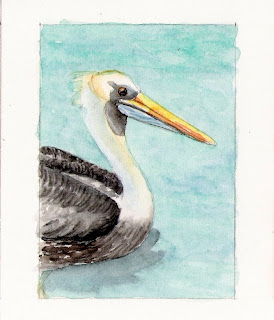 The pelican has already sold!! So, thank you to the buyer; I'll have that in the mail today! 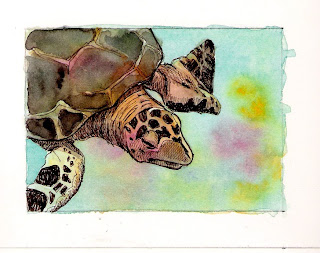 This is one that I've just sent in; as of this writing, it hasn't made it up on the site yet. I did the background first, sort of an abstract all colors running together sort of thing, because I was deciding what to draw still. Then I drew in the turtle, directly in ink (Micron, sepia). Then I added more watercolor. I like the way it turned out. 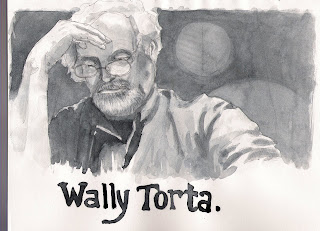 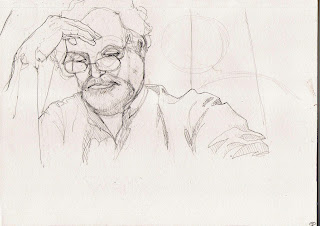 This is Wally Torta of CrackskullBob. He recently did a caricature of me for Julia Kay's Portrait Party which I was thrilled with, so I wanted to do one of him. The pencil sketch was scanned in just in case it became necessary to finish it digitally. I was really happy with this (and actually, I do like it) but I felt it was getting away from me there at the end. I accidentally made the shadow under his chin too dark, and the shadowy side of his shirt got confused. The light circles in the background were actually orbs of light on the original photo. They aren't very noticeable until you change it to black and white. I liked them, so didn't edit them out. This is done with pencil and watercolor in Canson Mixed Media sketchbook. 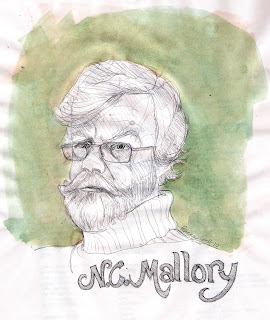 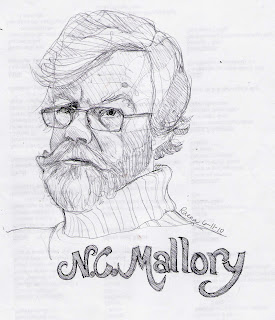 And this is NC (Norman) Mallory. He thinks I've made him look like an elf and assures me that he's really a troll. It's done on used computer paper (sorry Norman, I was watching a movie and didn't think I'd do a sketch worth keeping), with pencil and a watercolor wash for the background.

We're having a blast at the portrait party; you should join us! All levels welcomed!
Posted by Unknown at 2:27 PM 30 comments: 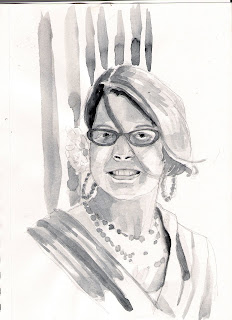 This is Inma Serranito, done for Julia Kay's Portrait Party on flickr. I'm having a blast with this! If you're looking to improve your portraiture, this is the perfect way to do it. Lots of photos to choose from, all skill levels accepted! 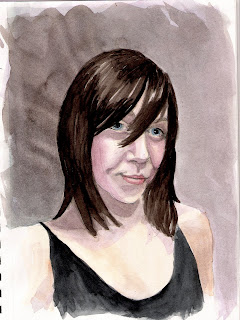 This is a not-so-good portrait of my sister. I recognize her, but something in the eyes is off...I think it's the pupils. In fact, as I look at it now, I think the eyes aren't even pointing in the same direction. There was a point earlier in the painting part that I actually liked this. But I couldn't stop; I obsessed. Oh well. I'll try this again. But maybe I'll look for a photo that shows her beautiful smile, instead of the little smirk she had in this one. Yes, that would be more flattering.
Posted by Unknown at 2:49 PM 18 comments: 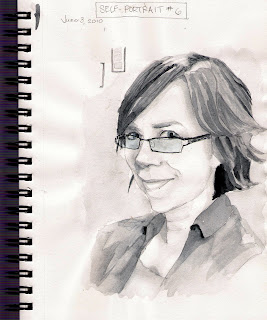 Whew! I've been doing some crazy things the last few days. Most of it has been a complete fiasco. Like the canvas that I glued tissue paper onto and then tried to do a portrait in acrylic. Only, I've very limited selection of acrylics and they didn't work the way I expected. Not only did the skin tone turn out a hideous orangy color, like someone spending too long at the tanning beds, but the tissue began to dissolve and break apart as I added layers of paint to hide the mistakes. It WAS a failure-- an utter failure. But that's one way I know I won't fail again. And it was fun to do something I've never tried before.

Not letting that get me down, I had something else I wanted to try. I've seen people draw and paint in books and I always thought it looked cool. So, I tore out the last pages of some book I had just read, you know the part where they introduce you to the first three chapters of some other book they want you to buy? I started splashing around and having fun. But, it was harder than I thought it would be. I misjudged how much the paint would lighten when it dried. I didn't get a good likeness. I tried again on another page...still didn't get a good likeness. So, I quit for the day, knowing that I had at least been experimental. 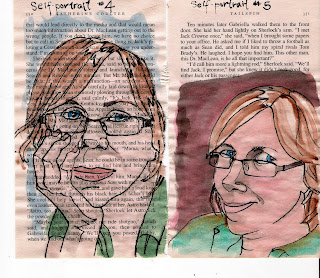 So, I woke up today determined to do something a little better to get my confidence back. It started off as an exercise in tones, but I quickly realized my photo was taken with a flash camera and had washed out most of the tones. Though it's light, I kept going. I made a few mistakes along the way. Like when I got a little green mixed in with my black and then painted the lenses. Oh, that was a happy accident. Then I decided I would paint just my eyes blue. But the pupils weren't yet dry and it turned into more of a gray. I like it enough. I did have fun with this one. There were other things I had intended to explore in this one that I didn't get to, but hey, it's only #6 of 100!

You may wonder why I put that one at the top of the post, when I talk about it down here at the bottom. Well, it's like this: Would you be able to look at your blog with these horrible drawings being the first thing you see? No way! Not me! If I'm going to post my uglies, I'll do it with dignity thank you very much!
Posted by Unknown at 9:20 PM 25 comments: