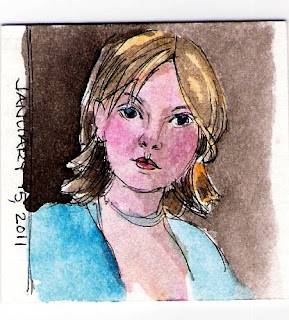 2011 started off very good for me art-wise. I was drawing, I was painting--I just wasn't posting. The words make me procrastinate. They are this huge mountain, a huge, insurmountable mountain. I suppose it wouldn't hurt to post without words now and then. In reality I like it when others use fewer words because it is easier to get through the hundred or so blogs that I check up on daily. Maybe I exaggerate, but only by a little.

This gal here I thought was from imagination. But, over on Yevgenia Watts blog, Watercolor Hands, I see a woman very similar(on the sidebar, three pictures down below her facebook icon) and I think I may have remembered it when I drew this. It isn't painted the same of course, but I can't help but see the influence. It is small: 1.5"x 2", watercolor and ballpoint pen. 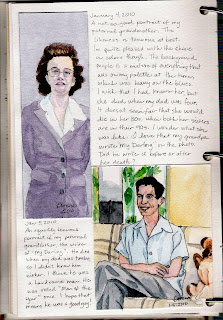 These two are my paternal grandparents. I never met them because they both died when my father was a boy. I think about them sometimes, wondering what they were like. These were both painted on scraps and glued into my sketchbook. The one of my grandmother has the most resemblance. My grandfather didn't turn out very well at all, as far as likeness is concerned. He was very handsome. I suppose that teddy bear belonged to my father. They loved photography and we have a lot of pictures of them, just not any with both of them. Someone has to take the photo, right? I think I may revisit this and try to set them both up in the same picture. She died when my father was four, and on her picture, my grandfather wrote, "My Darling". I love that he did that. 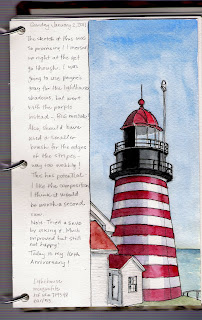 This was done from a morguefile.com photo posted by earl53, ref#179348. I loved the sketch, but felt like I ruined the painting first thing by using a purple for the shading on the lighthouse. It was very sloppy, with me getting out of lines here and there. (obviously not concentrating!) So, I went over it with a micron pen. It's growing on me now. Definitely glad I didn't pitch it in the trash like I was tempted. In fact, I almost didn't even continue the painting after the purple, and only did because I viewed it as practice. My thought at the time was, well, it is already ruined so it can't hurt any.

Every thing else I've done this month has been of the doodle-type. A lot is happening around here, some things I cannot tell you just yet, but I'm excited about it. Dang, I'm terrible at keeping secrets and this one will drive me nuts! I best go now, before I slip!
Posted by Unknown at 1:10 PM 34 comments: