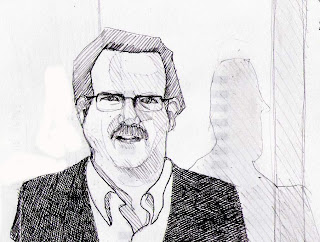 I was sucked into the YouTube zone tonight, watching video after video...one topic leading to the next. Before long, I was watching a video called the Bird Flu Hoax.(produced last year, not about the current flu pandemic) No idea how I got there, but I was there and I watched. Sort of. Mostly what I found was a video of a person remaining fairly still as he talked. To me that meant a perfect model! This is Dr. Ott. 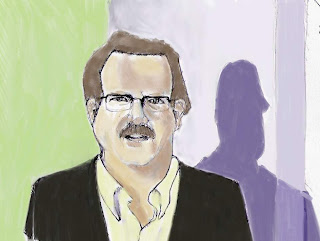 I tried adding a little color in Corel Painter X. It's okay, but what I really wanted to do was add watercolor to it. I was just too lazy to get everything out. Maybe tomorrow I'll give that a shot.

It's on printer paper again. I don't know why I spend so much on sketchbooks, I always end up back on the cheap stuff!
Posted by Unknown at 10:11 PM 9 comments: 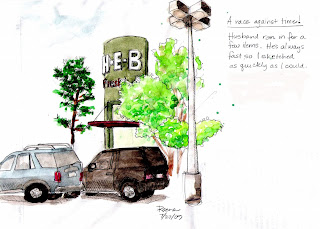 I'm really really embarrassed about this one. Well, the painting part...

Today we stopped by HEB, and while my husband went in for a few items, I stayed in the car to sketch. He is always very fast so it was a race against time. I only had time to sketch in the main part of the building, which I could only see bits of, the outlines of some trees, and two of the cars, one of which left before I finished. The sketch I liked. But, it was on regular printer paper and I tried to add watercolor. What a disaster! Oh well, I am glad to have made the experiment without worrying too much about the preciousness of a sketch! ...which is actually a huge step in itself, for me.
Posted by Unknown at 9:30 PM 8 comments:

Another attempt to sketch in public 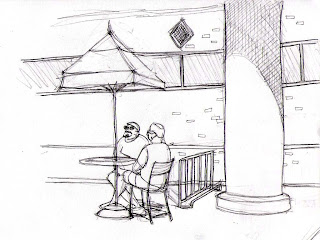 These two men were sitting outside a Starbucks enjoying their conversation...until they noticed a strange woman sitting in her car, staring at them. First the guy in the goatee noticed me. Then he said something to the other guy, who then turned to look at me. I pretended to be doing something else of course. Unfortunately they felt too uncomfortable to stick around.
So, it's a sketch in public, still from the protection of my car, and it's not my husband. How's that? I do wish I had been closer though; I would have liked more details. But mostly I am curious what they could possibly have thought about me! 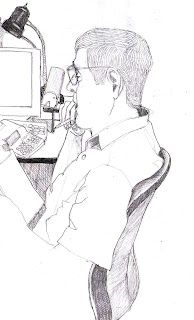 And here is my husband, who I am sure you must recognize by now. He has been a fantastic sport lately, letting me sketch him. He didn't used to let me because he hates to be still. It drives him crazy in fact. But, today it wasn't necessary to ask him to be still. I just caught him while deep in thought. He was almost perfectly still. You'll see a faint line where him arm moved down, which I chose to not erase.
Posted by Unknown at 8:55 PM 13 comments:

Not so perfect, but it's something 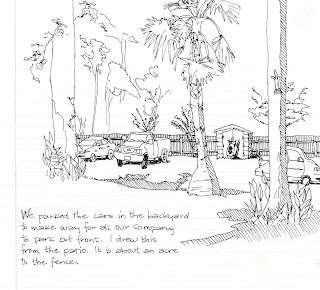 I didn't participate in the 23rd Sketchcrawl yesterday. I wanted to, but things came up unexpectedly. So I ended up spending quite a bit of time trying to post to the new EDM Superblog2. Thus far I've been unsuccessful. While taking a break away from that frustration, I went to my backyard and sketched. This is fountain pen on notebook paper. And I wasn't trying to be so perfect. You'll notice the car on the right...I started to draw the part that showed on the left of the tree, then got interrupted before starting the part on the right. I wasn't really back into it when I drew that side, and it shows. Oh, and the wheelbarrow ended up floating somehow, so I put a box looking thing under it. Things like this happen to me a lot because I rarely look down at my paper until I add shading or texture.

By the way, I pretty much ruined the drawing of my husband at Starbucks. Maybe I'll try to fix it later.
Posted by Unknown at 11:53 AM 12 comments:

A New Month, A Fresh Start! 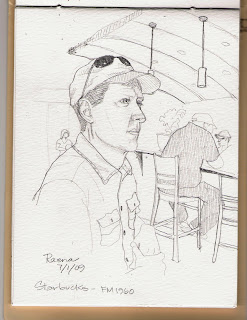 July is going to be a better month for sketching. I refuse to have another embarrassing month with only one post! Here's to a new leaf!

This sketch is of my husband at Starbuck's. I was really frustrated because nothing was coming out right. I'm posting it as is, because I did it in my watercolor sketchbook (homemade) and will probably be destroying it tomorrow when I add color! (Inner critic has found an amplifier...He's screaming at me!)

Anyway, I was wound up on my last post and said so much had happened that I would have to tell you in bits. Well, I've had time to calm down and now I think maybe I was just overreacting. It hardly seems worth telling anymore. Except the part about my uncle coming and staying with us for two weeks. He is one of the most interesting people I've ever met! He's traveled the world and has so many stories. Plus, he's an artist. How cool is that!
Posted by Unknown at 7:57 PM 14 comments: