Another movie spread and a couple of experiments 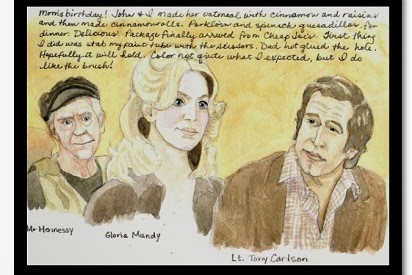 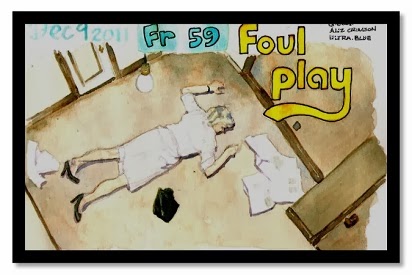 My family loved the movie 'Foul Play' when I was young.  In fact, it was a favorite 'go-to' every time we had a nasty thunderstorm.  In this part of Texas that was frequent.  Not so much these days with the drought though.

I'm not sure why, but showing my experiments always makes me feel more vulnerable.  But here goes anyway!  This is drawn from a photo of my cousin's grandmother.  It was a black and white photo and she had her daughters standing behind her.  I exaggerated some proportions and the color of the dress is completely 'artistic license'.  It is done in charcoal with watercolor and white gouache on a toned background.  I need to add some highlights to her face since forgot to save them when I added the watercolor.   I do like this piece, with the exception of that light blob at the top right that wouldn't take any more color.  I probably was holding it down with an oily thumb or something.  It was done in my 9x12 aquabee sketchbook. 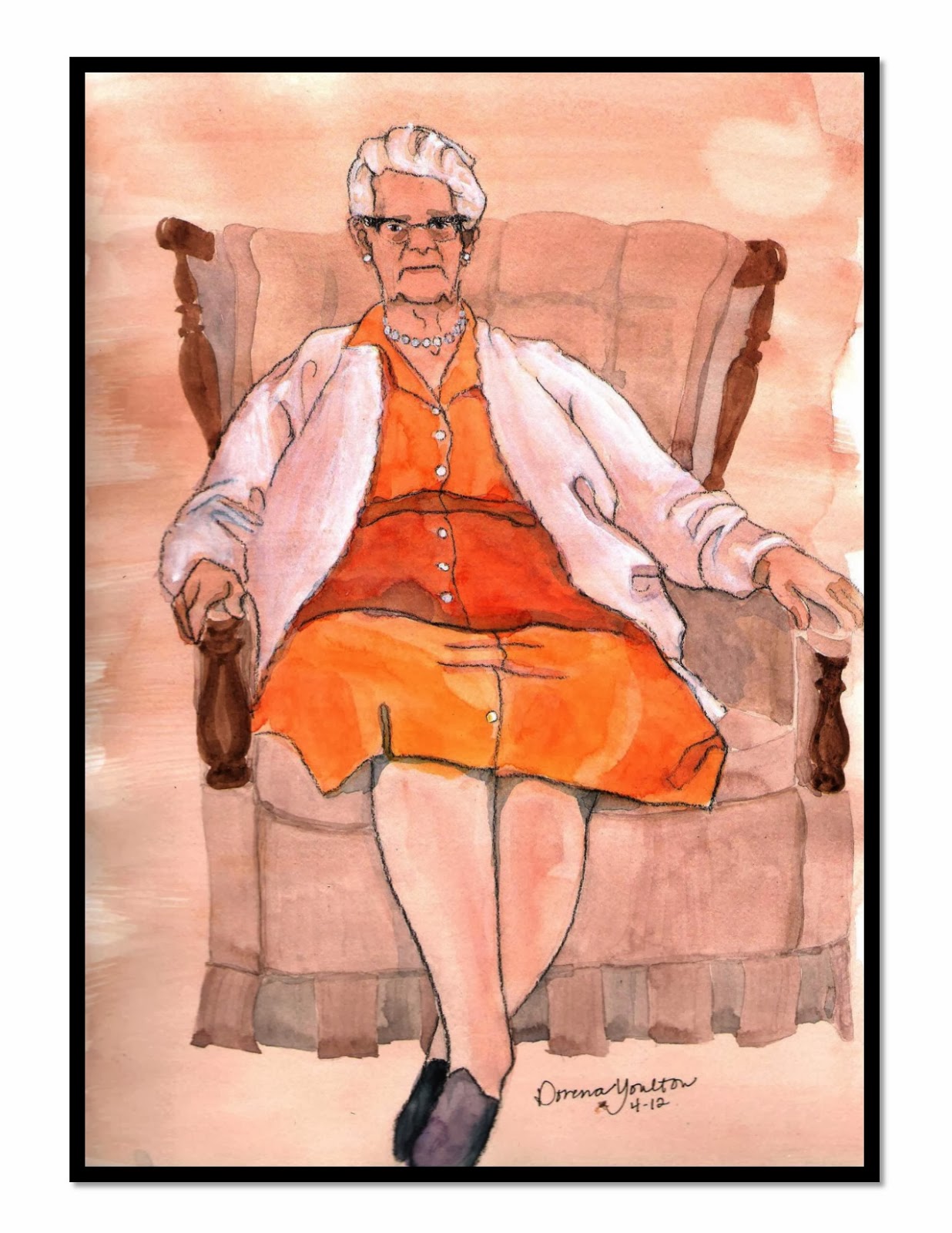 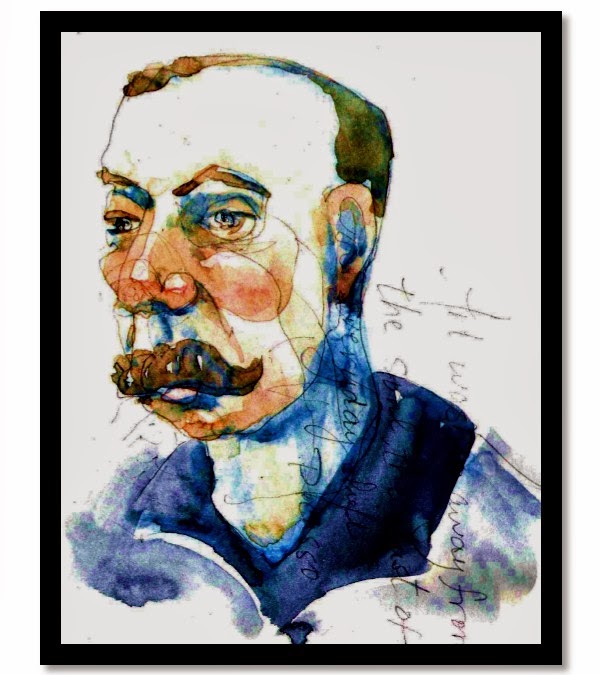 This was completely unplanned.  I had my desktop easel out and a page I had torn out of my aquabee sketchbook to do some gouache testing on.  I turned it over and had been doodling different things in pencil.  As I shut down my computer for the night, I felt unsatisfied because I hadn't done enough 'real' sketching.  I picked up my pencil, held it at the back end, extended my arm out and drew this imaginary guy right on top of all that doodling, most of which isn't even noticeable here.  You can see that same quote running vertically through the guy on the right side...just barely.  The vertical lines through his cheek were part of one of the doodles.    Then I started adding watercolor as sloppily as I could manage.  On purpose...sloppy.  And I liked it.  His face may seem a little out of perspective, but I can live with that given the technique used.  He does actually have color on his forehead which my scanner didn't pick up...or maybe my computer screen doesn't?

I seem to be at a crossroad, not sure where to go next.  In a way I really crave to be working with oils.  But at the moment it doesn't seem like a good idea to spend a bunch of money on new supplies, especially since I'm currently limited on space.  I liked using the charcoal and gouache with the watercolor and maybe I'll try more of that.  I think what I need is a good exciting subject.  Or maybe an art buddy.  My sister will be staying with us for a while when she returns to the US.  She'd make a perfect model.   I wonder how willing she would be to sit still for me.  Can't wait for her to get here!

Hope you're all doing well and staying creative!

UPDATE: I haven't been liking my scans lately so I'm trying something different.  The pictures on this post have been replaced with scans that I believe look a little better.
Posted by Unknown at 12:49 PM 20 comments:

Two More from the Movie Sketchbook and a Surprise in the Mail!

A couple of weeks ago (or maybe it's been a month already?...I've lost my sense of time lately!) I received this envelope from Mark Hill. I had forgotten I sent him my address to I could get one of these gems, and when it came, everyone around me was in awe and wanted to know more about it.  I scanned it immediately, intending to let him know that I received it, and to thank him!, but more drama unfolded and it became lost in the myriad of things I had on my 'to do' list.  Fast forward to today, when I decided I really needed to get this up...and then I couldn't find it....anywhere!  I looked and looked and just when I was about to give up, I looked on the scanner and there it was, right where I left it!  I was surprised when I got the envelope, that it had something in it.  I had forgotten about the sticker and business card he was also sending.  And I LOVE his business card!  Thank you so much Mark!  When things have calmed down a bit here, I plan to send something in return!  And if you haven't seen Mark's envelopes, you really should head over and email him your address!  [UPDATE:  I'm told that Mark is no longer accepting requests!] 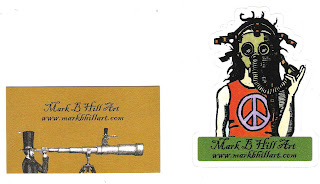 Here are two more movie spreads.  I uploaded them ages ago and never got around to writing anything for them so I could publish the post.  I recently had an emergency trip to Ft Lauderdale to meet up with my sister and pick up her dog for some dog-sitting.  She looked over this sketchbook one night and really made me feel good as she ooh-ed and awed over it.  She loved these spreads and was disappointed that I had stopped doing them. 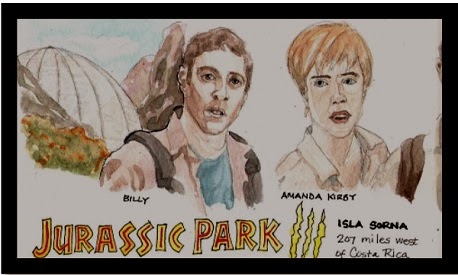 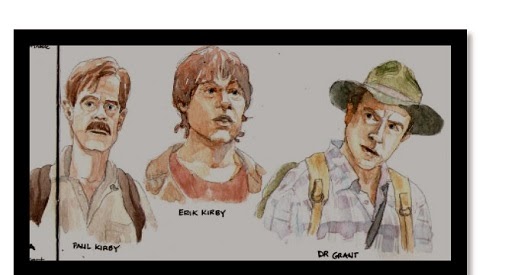 Though I haven't been doing much drawing (which means NONE AT ALL) since returning from my trip, I do have lots more to show you from before I stopped.  Note that I am only on Dec 7th here.  Hopefully I will get back into some sort of routine soon! 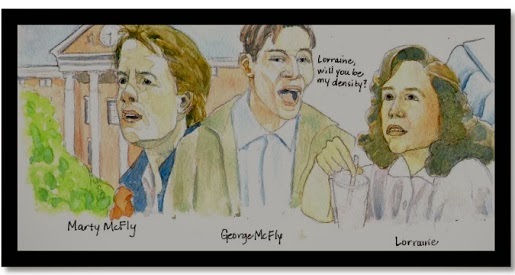 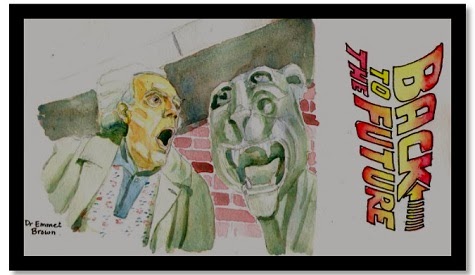 And I do hope to catch up on all your blogs soon!

UPDATE: I haven't been liking my scans lately so I'm trying something different.  The pictures on this post have been replaced with scans that I believe look a little better.
Posted by Unknown at 4:22 PM 8 comments: