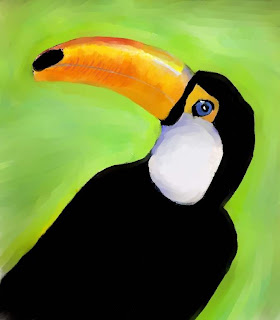 In order to meet one of my goals for the year, I need to post approx ten times a month. This month, the first month, started off quite well...only to fumble near the end. I want to blame it on an unwanted, and unexpected, "guest" we had this past week, Mr. Norovirus. It wasn't a terrible visit, not as things can get with him, but my productivity stopped. And I know, I know, that I could have kept going and was just using this as an excuse to sit around doing nothing. And that's basically what I did for a whole week! Nothing. And I was bored and I wanted to sketch, yet still, I did nothing! Why do I torture myself like that?

Okay, so about the Toucan. He started off as an experiment. I sketched him with a Pentel Pocket brush, then used some water-soluble oil pastels that I had from long ago, which I rubbed with my finger. I was trying to achieve something similar to Roz Stendahl's Stabilo Tone sketches. Well, a combination of poor quality materials, and inexperience, resulted in a really ugly, smeary drawing. I took it in stride though, it was my first try! So, I scanned the picture and using only the blender tool in Painter 10, I smeared it around until I got this. If it hadn't been just an experiment, I think I would have worked harder on the composition, which, now I see is rather awkward! What I loved about the toucan from my photo reference, here, is how very black his his feathers were and the colors were incredible! 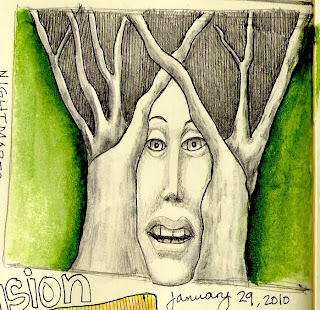 And these are the sort of doodles that come out of me when I watch television--which I've admittedly done too much of lately! Above is ballpoint pen with a General's Sketch and Wash pencil, then watercolor added. Below is just ballpoint pen. I started of well with the layering, but then the movie was too good and I ended up not doing any more. 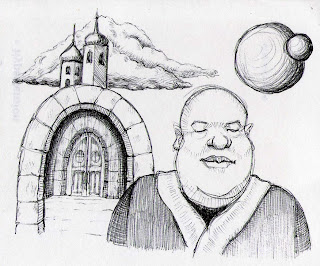 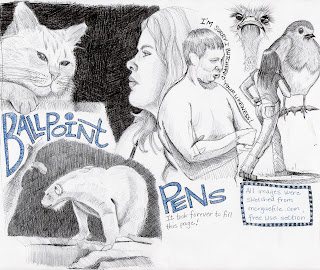 I don't have very much to say about these. I started off trying to get more layering into my sketchbook, as shown to me by Wil, even tried some typography. Things I learned: It takes a long time to fill a page when you're layering; and when drawing fur, it is probably not a good thing to start off with solid lines, as you have to work very hard to get the fuzziness back in. I had a slight headache when I began, which steadily grew worse and led to some cheating by filling in a lot of space with black. I tried to fill some with writing too, but the words wouldn't come to my aching head. My favorites are the cat and the ostridge (or is that an emu?). The boy? I didn't do him any favors, AT ALL! It was the first sketch of the page and I obviously was just warming up! 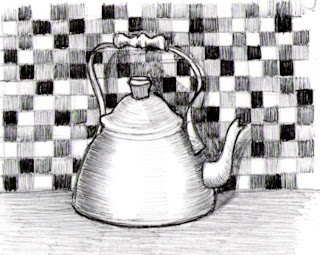 This is a small sketch done while my husband and I were cooking dinner. I think we can all guess who did most of the work! It's approx. 2" X 2" on a cheap writing pad.

After using a ballpoint for so long yesterday, I cannot wait to use my pencil again. Or some watercolor.
Posted by Unknown at 3:23 PM 32 comments: 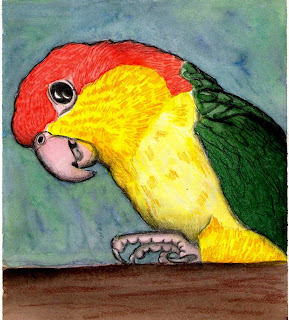 To say that I was uptight about my grades when I was young would be a massive understatement. I was a good student, but I fretted constantly. I was also disorganized. You know, one of those kids walking around with papers falling out of their notebooks, opening lockers to have the structural integrity of its contents give way. I was always forgetting my homework at school, or losing it on the way home and would have to rush back to the school to pick it up, or call a friend.

(I should also mention that I grew up in a rural neighborhood. This was the late seventies, maybe early eighties, so people still felt safe enough to leave their doors unlocked.)

One day in middle school, I forgot my homework again and decided to call a friend. I didn't know him all that well at the time and had never been to his house. He told me that I could borrow his book, just come over and get it.

My parents drove me to his house and I ran up to knock on the door. Somewhere deep in the house, a woman yelled “COME IN!” This wasn’t uncommon; we weren’t afraid of intruders. But, you did sometimes feel a bit awkward, knowing the person was probably expecting someone they knew to walk through the door. This was one of those times for me. So, instead of going in, I knocked again. I got the same response. I reluctantly walked in and looked around but no one was in the room. I called out, “Hello?” The same voice yelled, “I’M BACK HERE!” Even more awkward! But I started my way back towards the voice. And I didn’t see anyone, anywhere. It was eerily quiet. Finally, I got to the last room, and when I didn't see anyone, I said “Hello?” again.

Imagine my surprise when a yellow and green parrot screamed out, “I’M BACK HERE!”

The next day, I went to confront my friend about not being there, but before I could say anything he asked me what had happened; he had been waiting for me. I told him, “YOUR BIRD IS WHAT HAPPENED!”

The above parrot was drawn from a morguefile.com photo, free use section. It is watercolor and colored pencil on hot press paper.
Posted by Unknown at 6:35 PM 26 comments:

And the day just kept getting better! 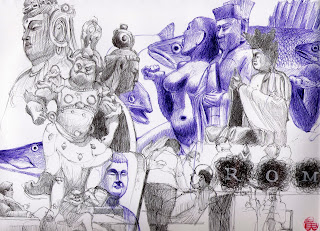 I said yesterday that it was a great day, but that was before I received this gift in the mail from Wil Wong. Now, I know I am horrible with my adjectives in that I used the same ones over and over again, but I really mean it, really, it was a fabulous day! I had sent Wil my invitation to the Art Exchange but he said he was unable to participate. He kindly offered to send me something anyway, which I won't lie, I made sure he knew I was interested! It is a page from his sketchbook. He described it as an average page from his sketchbook. Wow! Average? I've a ways to go, folks! I love how he has layered everything and it all looks like it belongs together on the page. I'm going to try bringing this into my sketchbook pages. I don't know about you, but I've learned something here. My sketchbook pages are usually a bunch of unrelated drawings spread out evenly over the page. They have no unity.

Wil, I am definitely not disappointed! This couldn't be more perfect for me. Thank you!
Posted by Unknown at 12:17 PM 5 comments:

This torso was done as part of my effort to work on tone. The reference image is taken from the drawing tutorials website (linked at right) and was intended to be a longer, more finished drawing. This is not one of those! This was done in about twenty minutes, while watching the cast drawing instructional dvd on the site. He highly recommends buying your own casts to work from, as opposed to his photos. But, the links he gives are for expensive casts. Very expensive! Like this one, about three hundred dollars! I know that some art supply stores carry cheap versions, but they can easily run thirty dollars apiece. That's quite a bit when you are looking for a selection. I had the idea that I would go to the thrift store and look for knick-knacks/statues that had a lot of definition. Then I would paint them with gesso to get the flat white color. 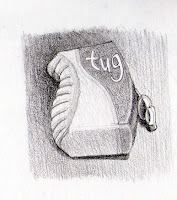 This is the inexpensive pencil sharpener that I carry around everywhere. I was watching "Signs" when I drew this. I enjoy watching movies again and again because you don't have to pay very much attention. You don't miss important information as you doodle in your sketchbook. (I find that people get very irritable if you keep asking what you just missed!) 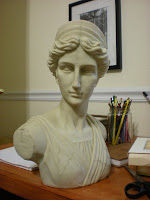 And this, THIS, makes me happy! I went to Goodwill to drop off some clothes and made a quick run in to look at their statues. And there she was sitting on a shelf, looking at me as I stepped in the door! Just waiting for me! How serendipitous can you get? I know it would have Julia Cameron smiling just as it had me smiling! Look at all that definition! And she's not small at nearly two feet! I don't even have to paint her! Meet Diana, I think. Or Artemis. Aren't they the same person? Daughter of Zeus? There isn't any information on her, so I'm guessing here. Only ten dollars--It's a good day!
Posted by Unknown at 12:28 PM 19 comments: 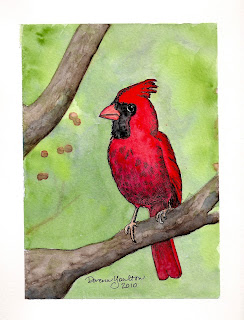 My grandma is fond of cardinals, so for Christmas I was going to do a cardinal painting for her. I've been making calling cards out of some of my drawings and giving them to family members. Well, I was struggling with my cardinal so I set it aside and didn't finish it in time for Christmas; plus, I got distracted by another idea, of doing portraits of the person on the calling card. I did a portrait of grandma instead of the cardinal. Her response? "That is AWFUL!" I finished the cardinal and am sending her replacement calling cards!
Posted by Unknown at 11:32 AM 22 comments: 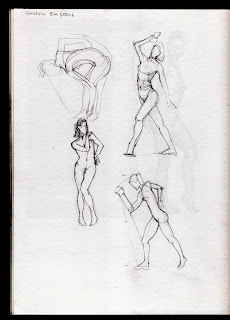 I haven't done any drawing at all for about a week so I'm putting up some quick gesture sketches I did in December. These are three minutes poses, which I paused and did in about five minutes instead. The time goes so fast!(from the drawing tutorials site)
January 2nd was my fifteenth anniversary, so while I've had ideas in my head about what I wanted to post for my New's Years resolutions, I was away from my computer and didn't get them in. And, for me, the longer I let myself stay away, the harder it is to return! 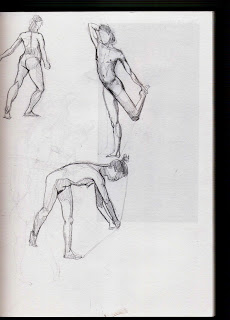 So, I resolve to:

1) Post at least twice as much as last year. That's 116 posts for 2010. I'm pretty sure I can do this since I didn't even post Jan-Mar last year! And several months have pretty low numbers!

2) I'm going to focus more on drawing than on painting, more towards getting good tonal values as opposed to everything being about line.

3) I've never done a "finished" drawing before, everything has been a quick sketch. I'm going to try and get several of these done this year, hoping that my short attention span doesn't betray me!

4) Sketch more in public! One group I've wanted to join for some time is Urban Sketchers, yet I never go out and sketch! That has to change!

5) Completely fill three sketchbooks--at the very least! I've never completed one. Not even this year when I've drawn more than ever. How could that be? Well, I think I have eleven sketchbooks started. I just always seem to find something about them that I don't like.

Well, I don't want to overdo it here. I tend to get carried away and then set myself up for failure. Best of luck to my online friends. Hope we all succeed in our goals!
Posted by Unknown at 11:06 AM 17 comments: