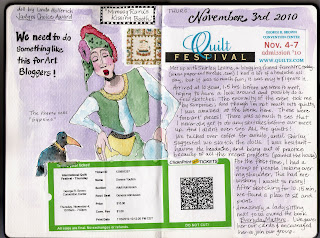 I'm not much into the quilting arts or knitting arts, or really, anything to do with sewing unless it is necessary in the scheme of things. (ie adjusting hems, making journal covers) I only went to the quilt festival because Shirley Levine was there and I wanted to meet her. But, I have to tell you...these aren't your grandmother's quilts! I was amazed at how far they've taken quilting. Some pieces were truly 'fine art'. I walked around for an hour and a half before Shirley and I were to meet, and still, I did not make it down every aisle. 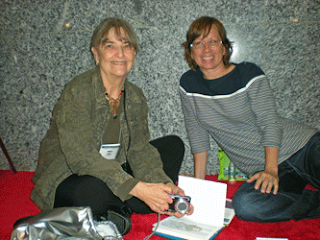 We had a great time, talking almost nonstop, except while we were sketching. This was the first time I've ever had a crowd build around me. It was a bit nerve-wracking and all I could think about was how unfortunate that I let myself get out of practice! Yep, I did that again! But, I had all compliments and they were very nice, even though I was blocking the path a little! I wasn't watching Shirley, she was behind me somewhere, but I'm sure they made their way over to her too. This was a great experience for me. I don't think I would have had the nerve to pull out my sketchbook if I hadn't had a companion with me. Safety in numbers!!

So, where have I been? After we finished siding the garage, we repainted the exterior of the house. This is no small feat since we are in a tudor style home with very tall peaks! Picture me, teetering on a 32' ladder, stretching as far as I could without falling off, with a paintbrush! It took 20 gallons of paint and several weeks (because we had to replace a lot of wood along the way...completely rebuilding a bay window). Each night when I came in, I cooked dinner, and then collapsed in front of the television. I made a sketch here and there, but they were doodles really. And not very good ones. It looks like this completes our list of projects for this year. We only have two or three more, which we plan to wait until next spring to begin. Thank goodness! I'm really feeling my age at the moment!
Posted by Unknown at 5:58 PM