Bitten by the Dog Days of Summer 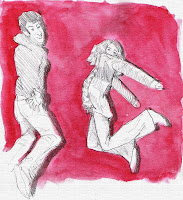 Whew! It's been ages since I updated, longer if I go back to the last art I posted. This summer hasn't been great for me. I am not prone to sulking or depression, but I'm an outdoorsy type and Houston just had the hottest August on record. I do not like heat, especially with high humidity. It had me thinking about Boise, and wishing I still lived there. I lived right on the Boise greenbelt, which runs straight through the middle of town next to the Boise river. From the greenbelt I walked to Boise State University (not as a student), the library, the post office, the grocery store (when I only needed a few items!), 8th St marketplace, the zoo, numerous parks. You get the idea. I was outside all the time; lots to draw too. So, in my sulky state, I complained about not having anything to walk to...everything is spread out. Not that it matters because who would want to walk here?! And what the heck is one supposed to draw around here, a barbed wire fence? To compound my problem, after doing numerous remodel jobs in the house, which was exhausting but satisfying, I got out of the habit of sketching. I made a sketchbook, then another. But when I picked up my pencil to add the first sketch, I couldn't get into my groove and it turned out terribly and now I have to look at it every time I pick up my sketchbook. I have struggled with trying to get it back for several weeks now. (Upper left: morguefile photo: ref id# 208873 by LU311 done in pencil and watercolor; Upper Right: A very small gesture sketch of a fleeting moment, done in ballpoint. )

For Labor Day weekend, we had my brother-in-law's family come for a visit. My 7 year old niece, whose work I've posted here before, loves to draw. I gave her a sketchbook last year and in it we are writing a story and illustrating it. We drew tons this weekend, all of it from imagination (very unusual for me). I was really getting into the groove by the third day, feeling like that dreamy child again. In the story, my husband and niece and I are always getting captured and we have to use our super powers to get free and conquer the bad guys. After watching "The Spy Next Door" (Jackie Chan movie), we suddenly remembered we were Master Ninjas. I do wish I had remembered to scan in some of our artwork to show you! I know that you would have been impressed with her talent! 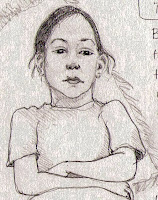 Here is a very quick sketch of my niece. She looks very serious here, but believe me, she is nothing but energy and giggles! I asked her to be my model and hold still. I laughed when she instantly went rigid with her arms straight down at her side, her eyes unblinking. After I got her a little more relaxed, with her arms folded, she asked me how long this would take, to which I replied that sometimes it could take hours. Her eyes went huge! This sketch might have taken five minutes; that is all she could take.

I have since filled six pages of my larger sketchbook, hoping to break this spell. I think it is working, I do feel lighter/less burdened. Left: Wishing at was at the Urban Sketchers Symposium. Pencil sketches from photos posted on their site. Orange background added in Photoshop. (It made the sketches stand out more.) Right: Sketches with my Lamy Safari using morguefile photos as reference. 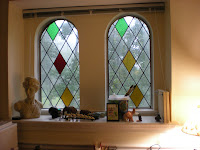 And the heat has finally broken. We are only in the seventies today, as we are getting pummeled by Tropical Storm Hermine. It has been dark and rainy all day, but to me it is much preferred over August's weather. This is the view out of my studio window at the moment. Let's hope that I've gotten over my moping and that I remember next year, when it is summer and miserable again, to at least keep drawing as that is what normally keeps me happy!
Posted by Unknown at 1:48 PM