Finally there was a day when I could sit outside and comfortably sketch without feeling the oppressive heat suffocating me. My husband was working on a lawnmower in the garage. I sat in a camping chair out front, in the shade. Of all the things I was surrounded by, this dirty old gas can is what I chose to sketch! (well, technically, I guess everything out there is dirty!) I sketched it in pencil. Then I used tracing paper to transfer it to watercolor paper. I knew of this technique, but believe or not, I had never tried it. I think one of the advantages of it is not worrying about messing up the original sketch. Definitely something to remember if you've lost your confidence or if you would just like to try painting with different techniques! 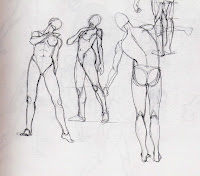 Sketches from posemaniacs. I had just about forgotten this site existed until someone posted some sketches they did. I filled nine pages (9"x12" sketchbook) with 30, 60, and 90 sec gesture drawings. Then, I went to random pose and did these sketches, untimed. I'm not sure how long they took, 5 mins or so? And for the first time, I realized I could keep the same pose and sketch it from a different angle. (The two on the left are the same pose, rotated slightly.)

This was done mostly while watching Pirates of the Caribbean. I paused the scene at the pier to draw the two men. I loved the guy's face on the left. Very unique! Started as a blind contour in ballpoint, so his face is somewhat skewed, but I like how it gives it a caricatured look. Then I drew the skeleton, bottom left, from memory. I have a photo of a skeleton head that I drew from next, to see how much I had retained in my memory sketch. More meerkats, started blind contour, shading and texture then added. This page was fun to do. See the tilted girl? Do you do that? Seems like there is always at least one drawing on my page which somehow ends up cockeyed!

This is self-portrait #11 of 100. (A redo of it, actually, as the first one was a disaster!) After the first sketchbook I bound, I actually made another, thinner one, using a different paper. Easier to carry around! My first one is a little wonky and I discovered that I had folded the pages against the grain instead of with it. So, this book actually turned out much better! However, I've now made another discovery. I really DISLIKE the Canson XL 140lb watercolor paper I bound in it! (I think it might be their student grade. ) Everything I've done on this paper has turned out dull and sort of fuzzy. It doesn't hold up to scrubbing at all! Here, I had a sketch that I really liked. I made a small mistake near the chin area, and using a technique that Dan told me about, I tried to gently scrub it away. And, I emphasize that I was gentle! Terrible results! The paper disintegrated and nothing I did would fix it. I only realized that it was the paper, and not me, while reading Cathy Johnson's Creating Nature in Watercolor, which I just purchased. (I love the book, Cathy!) Suddenly I realized that I had not done a single painting on this paper that I liked! And really, I think it was this blow to my confidence which started the whole block I've been suffering lately!
Posted by Unknown at 10:13 AM