2.5"x 5.75" pencil and watercolor. You may not believe it, but this makes me very happy! I have nothing to say that would pick this apart. I find this strange since I didn't spend a lot of time trying to get the sketch right. I was watching videos while painting it over the course of about three days, finishing it just this morning. Why did it take so long? Well, I definitely could have finished it in one sitting, but after I started and liked the direction it was heading, and because I didn't want to mess up, I would stop until I had a better idea of where to go next. Normally I'm much more impatient! I used a photo on morguefile by Scott Liddell as reference. 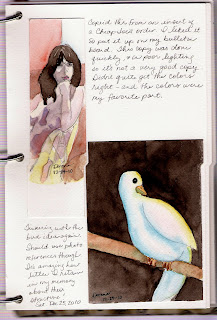 Last week I reorganized my studio. I have a new bookcase which has doors on it so I can hide the clutter. My desk now has space available! I don't have to balance everything on top of something, waiting for the first bump to make it all crash down! All of my scraps of watercolor paper were put into a tin. For some reason, I find it so much easier to work on scraps. When they turn out okay, I glue them into my sketchbook.

This woman on top was a copy of a painting by Don Andrews, which came on an insert in one of my Cheap Joe's orders. I liked the painting and put it on my bulletin board. The dove is from imagination. Both are pencil and watercolor. Sorry for the bad scan. I put my hand on it half way through and didn't realize I messed it up until putting it up here.

Not much to say here, except that he was from imagination. Obviously the chords on his neck wouldn't be so thin! (That is something I just noticed!)

So, how did you do on your resolutions in 2010? Me? Not so good! Not only did I not double the number posts of 2009, I didn't even equal them! I did sell something though. Though, it was for Ripple and the money went to a charity instead of me. I was close to being published, but unfortunately, that didn't work out. I'm really not good with resolutions. Something in me wants to rebel and do the opposite. Or is it that I make resolutions I'm not so sure I really want to make? 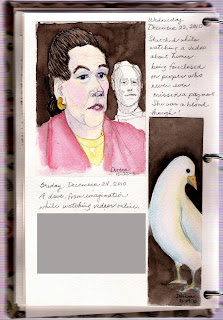 This is another sketchbook page that I've glued in some drawings done on scraps. The bird is from imagination, again. The woman was sketched while watching a video. The face behind her was a bronze statue. She was blond, the walls were white. Obviously I just made everything the way I felt like making it! (Gray box is just me blocking out some of the words!)