Some doodles on scraps of paper 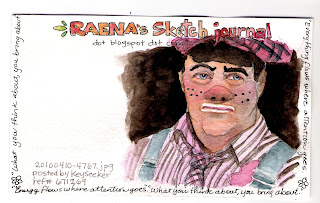 After making my last sketchbooks there was a few scraps of paper left over. The one above is 3.5"x6". My blog name and the quotes were written first; then I found an awesome photo over on morguefile and added it to the middle. (photo by keyseeker, ref. # 671269) I was watching a movie while painting this and didn't expect much, but I really like it and now it is glued into my larger sketchbook, along with the following sketch. Pencil with watercolor. (Though I used a black pen to do the pupils.) 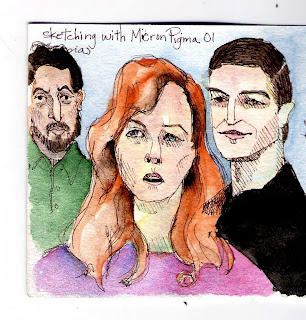 This was also done while watching that same movie on another scrap piece of paper. It is about 3"x3". Used sepia pigma micron 01 and watercolor. I think she looks a bit like Nancy Drew. I mean, she has that expression...like there is a mystery to be solved, don't you think? Maybe the guy behind her on the right is one of the Hardy Boys.
Posted by Unknown at 1:33 PM