Trip to the Cemetery 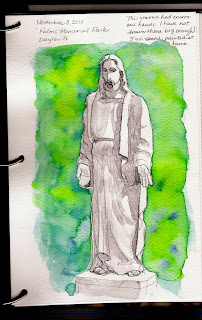 That pressure of posting three times in three days has me going. I just couldn't let the day slip by and miss number four! Last year, as one of my new year's resolutions, I had decided to post twice as many times this year as I did last year. Well, that didn't happen for me. In fact, I need to post ten more times this month just to be even with last year. More than that though...and I BEAT last year! (trigger the Rocky theme song, please)

So, I did this yesterday. I went to a cemetery with my mother, who needed to take a picture for someone on a site called 'find a grave' or something like that. (She does genealogy.) I figured it would be a good sketching opportunity. Did you know that it only takes a few minutes to take a couple of pictures?? Well, I rushed through the sketch, sort of in a panicky way, knowing any second it would be time to leave. This rushing feeling made it hard to concentrate and I flubbed up on the folds of the robe. Wasn't happy with the sketch, but threw some paint on last night to see if I could make it work. It was really difficult to tell what was what (fold lines versus shadow lines) and I basically just guessed on everything. The gray color I used was a mixture of everything that was already on my palette. Thinking I was done, I wiped off the palette, only to see that some of the shadows didn't get dark enough.

One thing that I know I didn't get right, is that I drew the hands a little too normal-sized. His hands were HUGE! Big Fred Flinstone hands! But in the end, I like it.